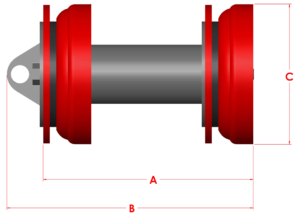 Effective batching and separating capability is the name of the game for the Series DCD pig.
Every pig in the series is equipped with two sealing discs and two Apache Series C Cups. These multiple sealing
components create a positive seal between dissimilar fluids, while simultaneously providing a larger sealing surface
area. As a result, its sealing capacity, and overall batching and separating capability is greatly improved.