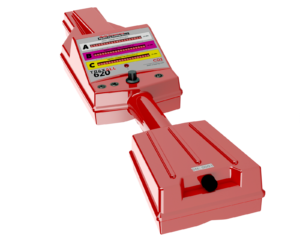 Simpler, less expensive and easier to use. These were the design guidelines of our new TRAXALL 620 receiver. And while taking many of its design cues from its big brother, the TRAXALL 720, the TRAXALL 620 removes much of the complexity and expense associated with that system’s major features.

With TRAXALL 620, each of up to three transmitter frequencies are represented as scrolling rows of LEDs. This intuitive user interface means the TRAXALL 620 receiver requires very little training and support, thereby lowering the total cost of ownership of the system.

FieldLink is capable of seeing as many as seven FieldLink equipped devices at any time, with selection among the devices within range being a simple drop-down menu in the FieldLink Configurator program.

One of FieldLink’s introductory uses is to configure CDI’s new TRAXALL compatible “X series” transmitters (such as the X300-2C) among their seven colorized frequencies and 22Hz legacy frequency. Since this configuration process is wireless, it may be performed even when the transmitter is attached to a pipeline pig!