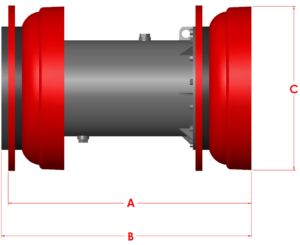 Effective batching and separating capability is the name of the game for the Series DCD pig.
Every pig in the series is equipped with two sealing discs and two Series C Cups. These multiple sealing components
create a positive seal between dissimilar fluids, while simultaneously providing a bigger surface area. As a result, its
sealing capacity, and overall batching and separating capability is greatly improved.